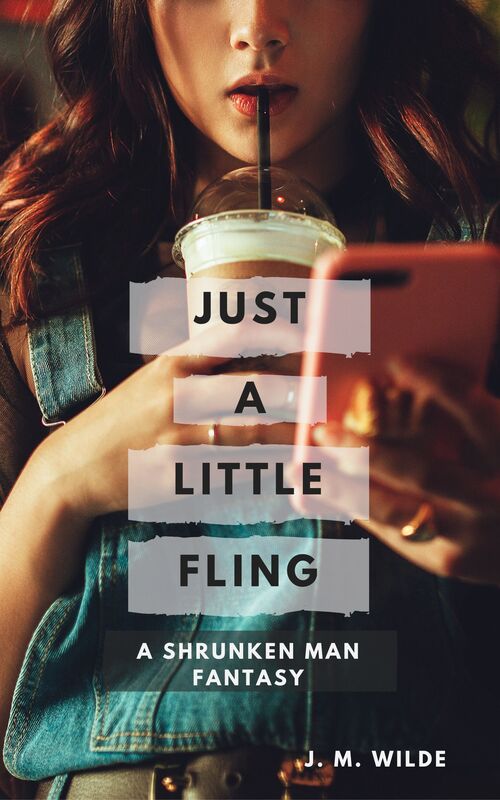 One
Mark blinked, his eyes straining from the monitor’s relentless light.

Could he really do this?

On the television, pundits continued their talk of major changes to the law. Every classified ad site, even one as infamous as Gregslist, was at risk of shutting down if the new legislation passed. He pressed the remote and the TV went silent. It was now or never.
A few years ago, it would have been never. A classified ad would have been out of the question. He certainly wouldn’t have contemplated one so uniquely risky. But that was before TomThumb.

He could still remember the first time he saw a demonstration. The human test subject swallowed a pill, entered a glass chamber right out of a science-fiction movie, and became...less. The news anchor covering the demonstration had gone silent, in shock, along with Mark and the rest of the world.

The man in the chamber had sat down on the floor and simply shrank. When it was over, climbing out of his own clothes, he was an inch high. It was unreal, unbelievable, and yet there it was for all to see. It didn’t take long for every news network, talk show, and social media chatterbox to erupt with every conceivable hope and fear for the future of this technology.

The frenzy was nothing compared to how Mark felt.

The technology was still new. Tightly-regulated, after a year it became a fixture of big arenas, where special demonstration events were held worldwide, drawing crowds like A-list rock concerts. Adventurous people would shrink down by taking the pills, and then enter one of the specially designed chambers to reverse the process. Private events for the rich and famous were instant tabloid fodder. But nobody was talking about what it meant to Mark.

Then came that fateful evening, watching TV after work: TomThumb.

Possibilities opened up, rising from somewhere beyond his dreams. It was a revelation. The technical details were beyond Mark’s comprehension. But the results were easy enough to understand: the TomThumb allowed human beings to shrink in size. Becoming smaller, weaker, lesser, the possibility called out to Mark like a siren’s song.

This was it. This was what he’d been looking for his entire life. The thought of being miniscule in size, at the mercy of an enormous woman, it was euphoria. The total helplessness, the dependence, even the danger, it made him feel like he’d finally put all the pieces together.
Except one: How? How could he even hope to live out this fantasy? Access to TomThumb tech wasn’t something found during a trip to the store. And Mark was single. Who would want him around when he was only an inch tall?

Then came the night when, bored and hoping to kill time, he created an anonymous email address and using it, logged onto Gregslist. There they were: “M4SW” and “SM4W.” He knew that “M4W” meant “man for woman,” and vice versa. But what did these mean? A quick search and he had answers:

That stopped him cold. He read through some of the ads.

“Successful male seeking female to adopt me as a pet. I want to be kept in a hamster cage.”

“Are you my future brobdingnagian bride?”

That was just the tip of the iceberg. There were countless more, all combinations of sizes, roles, and sexualities. Most also included a curious phrase: “TT Connected.” Another quick search and there was another answer: “The term ‘TT Connected’ means the person posting the ad has access to TomThumb technology, legally or otherwise.”

Mark was sweating bullets. No way, he thought, this can’t be real. He was certain that most had to be scams. But a little more research turned up stories of secret places where “shrinkies” met to live out their fantasies. Some of the ads could be legitimate, and they were better odds to live out this fantasy than he’d had two years ago.

Of course, the risks were pretty clear. Most of those “Woman For Shrinking Man” posts mentioned money. That didn’t surprise him.

“Put yourself completely in my power.”

“Be entirely at my mercy.”

And most also contained some variation of “...and pay for the privilege of being mine.”

Mark had never gone down the financial domination path before. The risk was alluring, but he’d always held back. This was a whole new extreme and yet Mark found himself, for the first time, seriously contemplating such a thrill. This was beyond giving out his credit card number to a woman online.

At that size, a woman could do anything she wanted to him, with him. She could force him to give up his bank account numbers, passwords, and credit cards, all of it. If he told no one about his plan to shrink, and the woman didn’t keep her word, he’d disappear without a trace.
He asked himself again: could he really do this?

It wasn’t like writing something was a binding contract. Ghosting would be easy enough if he felt uneasy. But could he really trust himself to go through with this at all? Should he? His fingers made up his mind for him and he began to type: “SM4W.”

M, 32, seeking to shrink...ready to give up absolute control to a woman ready to take it.

​Buy the eBook at Smashwords!

​Buy the eBook on Kindle!
​
Text Copyright 2020
​All text and writings are copyright J. M. Wilde unless otherwise noted.
Powered by